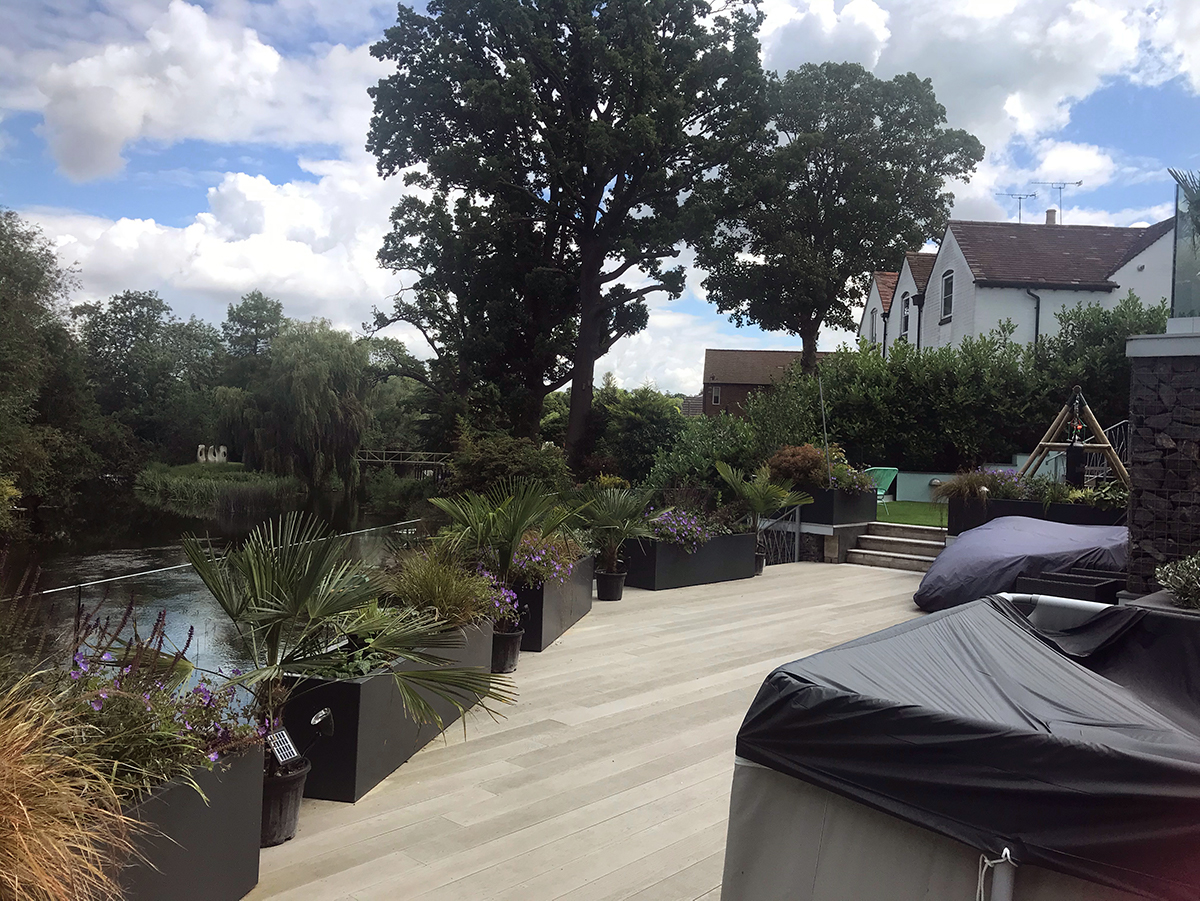 Barford, about three miles south of Warwick, was featured in a 2014 Sunday Times list of the top 10 villages to live in the Midlands.

One of the aspects that makes the idea of living in Barford so appealing is the River Avon, which winds its way through the village.

We were contacted by our clients back in 2017. They had purchased a much sought-after house backing on to the river. Along with their architect, they were in the process of getting a house extension through planning. We were asked to look at the garden, as that would also very likely require planning permission, given its location.

The brief was to create a family garden – making some safe flat space for children to play and the adults to relax and entertain.

That’s a reasonably standard brief. But this one was made more complicated by the site, with a dizzying drop from the back garden to the river, and also the neighbours, who were not totally on-board with the extension proposals.

We also had to juggle keeping the views of the river open for the family, while creating privacy from the fishermen using the opposite bank.

Then there was the issue of accommodating the river’s overspill during times of flooding.

This was no usual project.

These are some of the ‘before’ shots’. 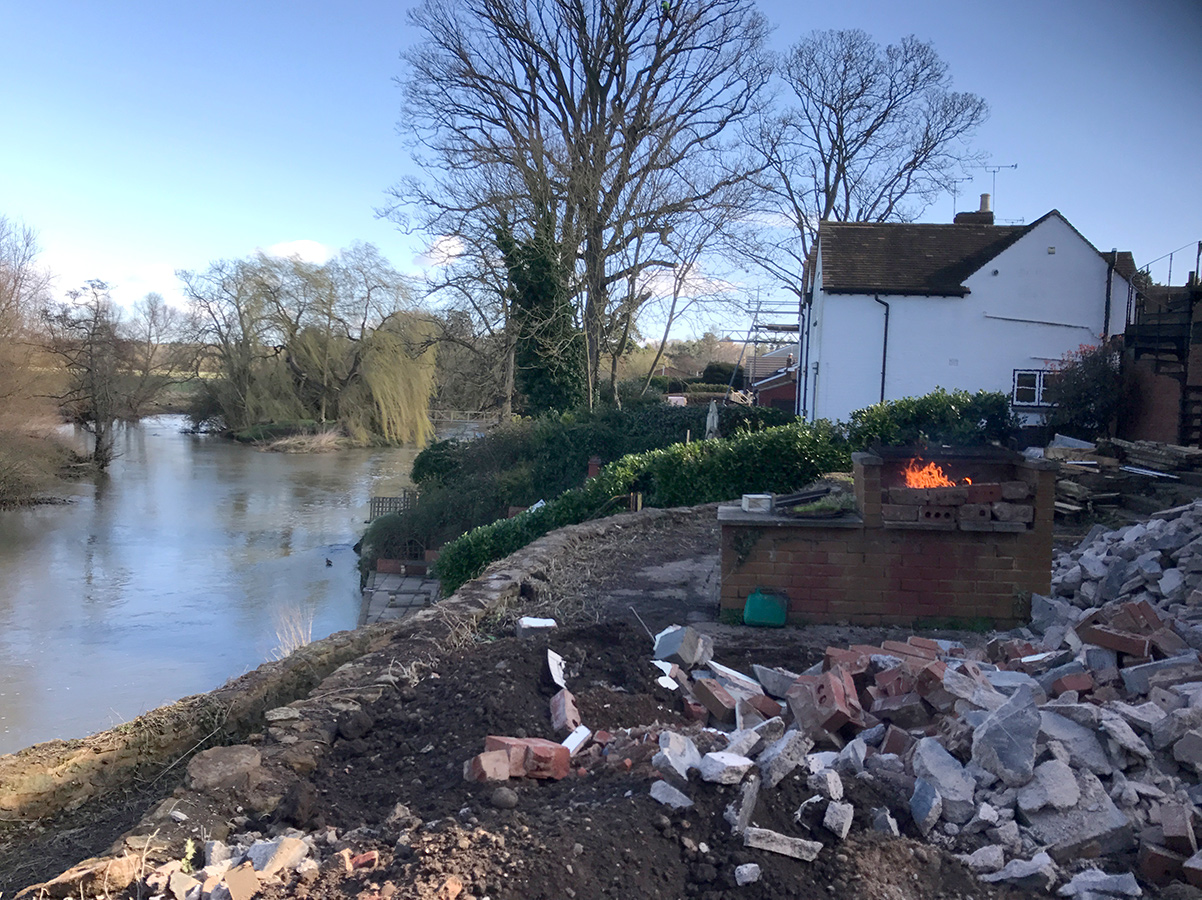 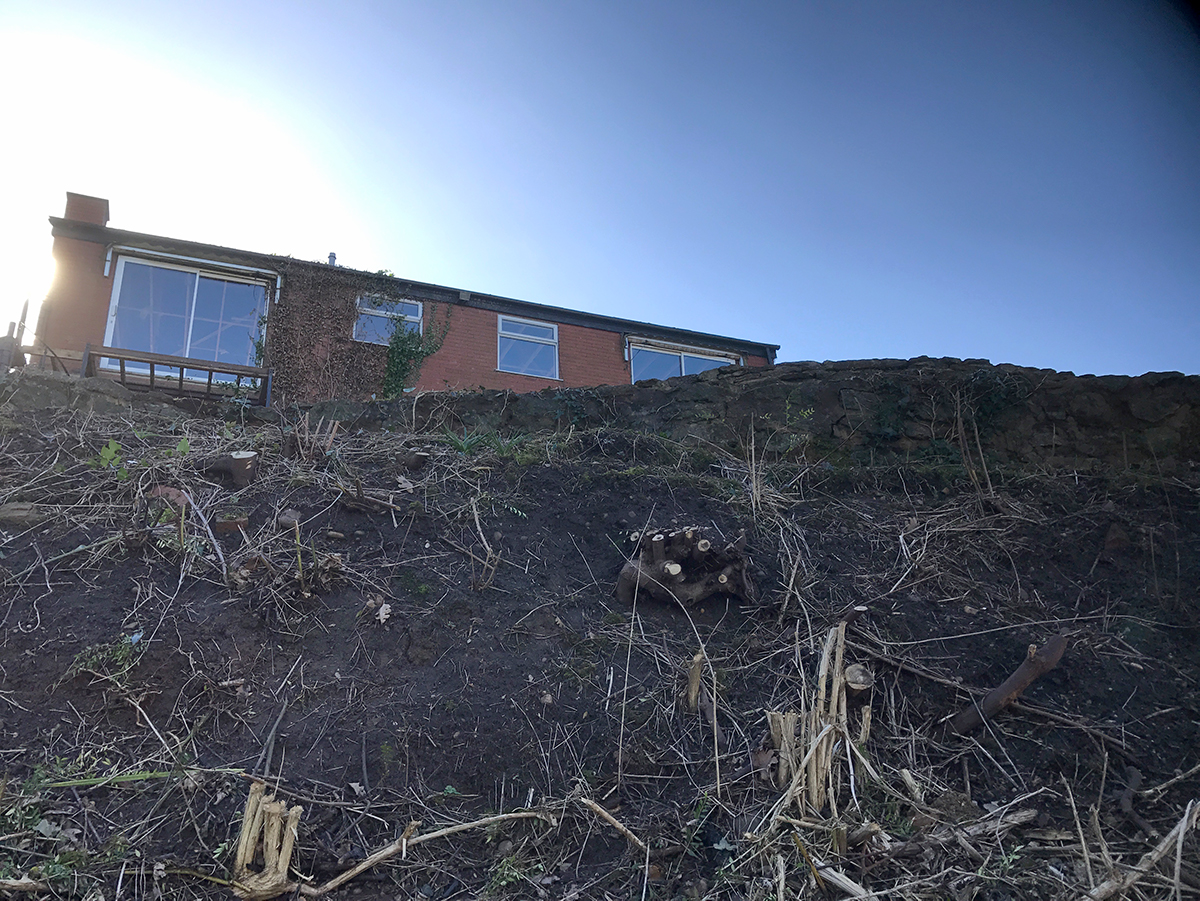 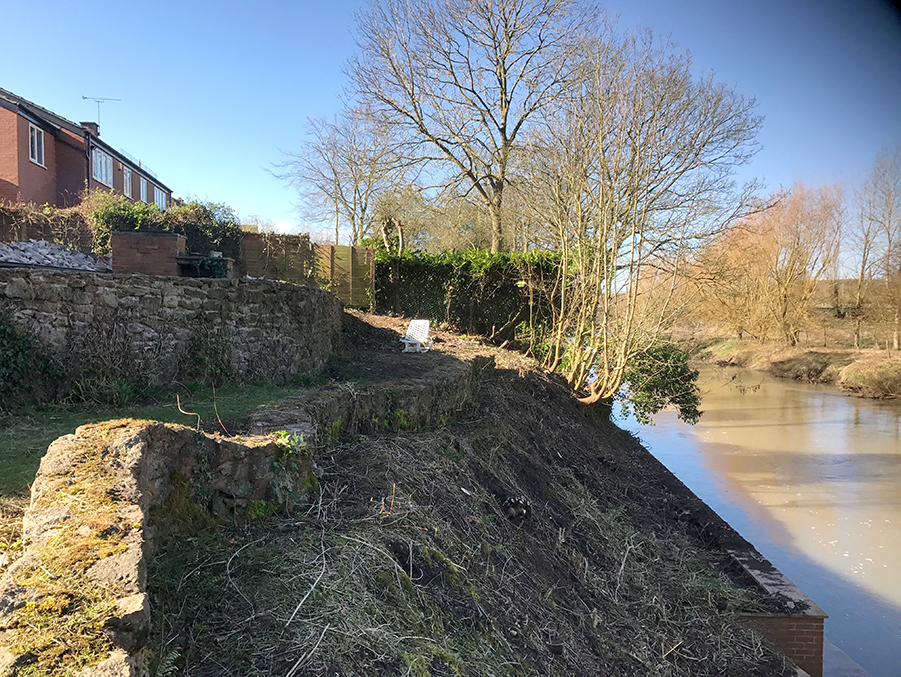 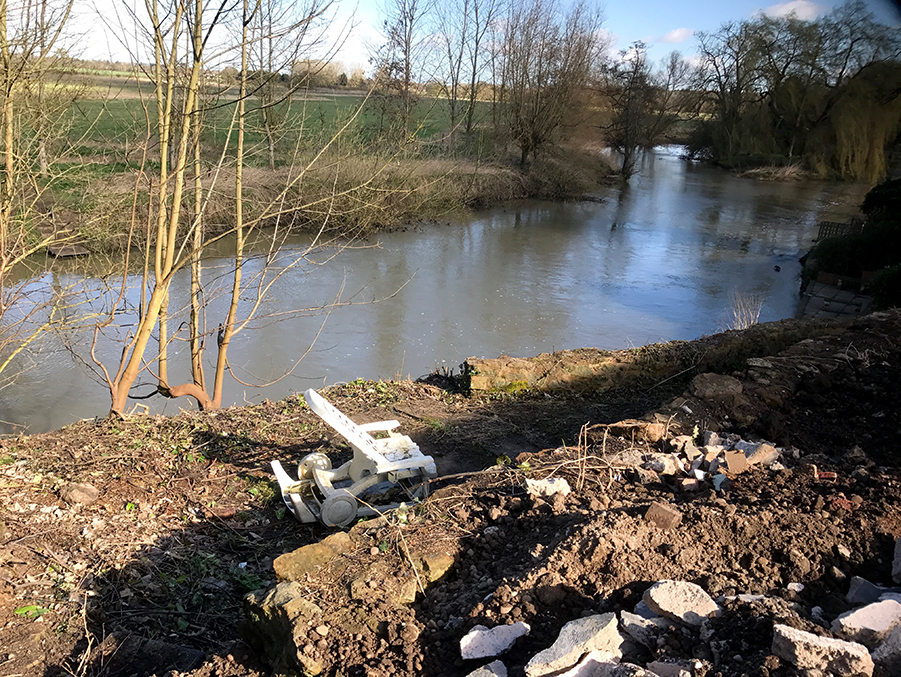 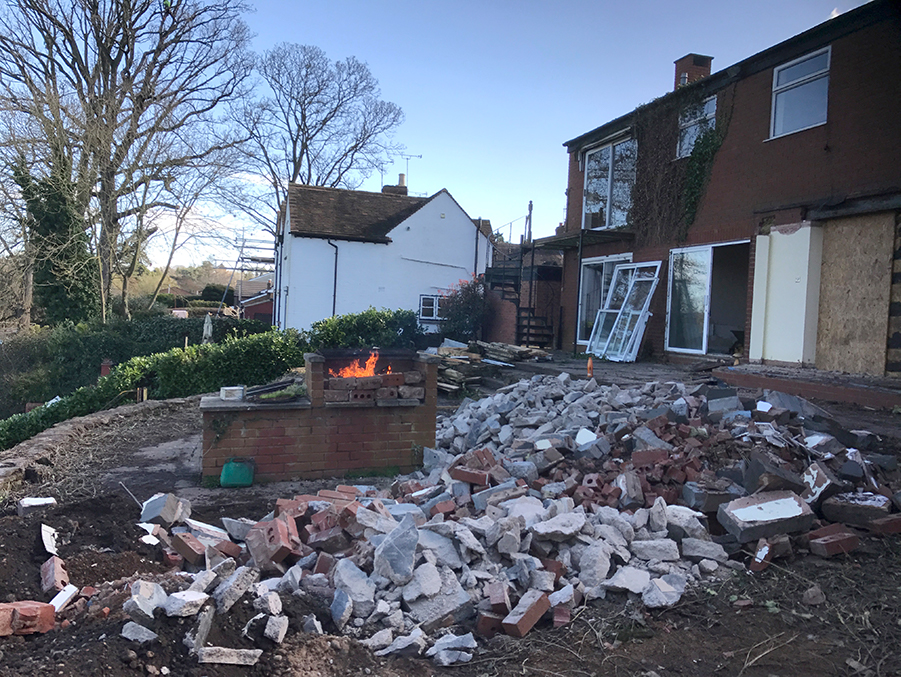 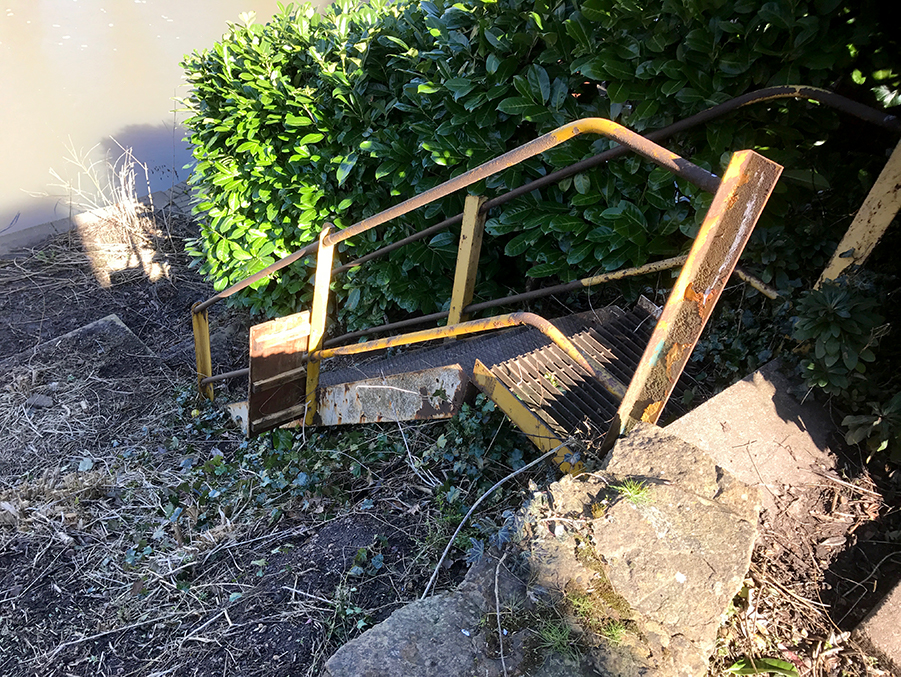 To harmonise with the proposals for the house, the garden required a clean, modern look. We needed to provide grassed areas, sitting spaces, a place for a hot tub, play equipment and a large temporary swimming pool. We also needed to retain safe access to the river’s edge.

We knew we would have to build out and over to get usable space. We wanted to provide a better view of a small island in the river, so that meant coming out a fair distance. We were aware of the potential planning issues this would create, and that the neighbours were already unhappy with the work being proposed for the expansion of the house.

A land survey revealed a drop of six metres from the back of the house extension to the water’s edge. We realised some heavy construction would be needed to get the most out of the site. For the lower level, we proposed a steel beam and floating composite deck, which was flood-proof and allowed access to an existing jetty via a bespoke metal staircase.

The upper and mid-levels were designed using Gabion walls, angled to create space. We found room for children’s play equipment, and we even proposed a climbing wall, which was eventually not used. All the retaining walls were clad with safety glass balustrades so as not to block the views. 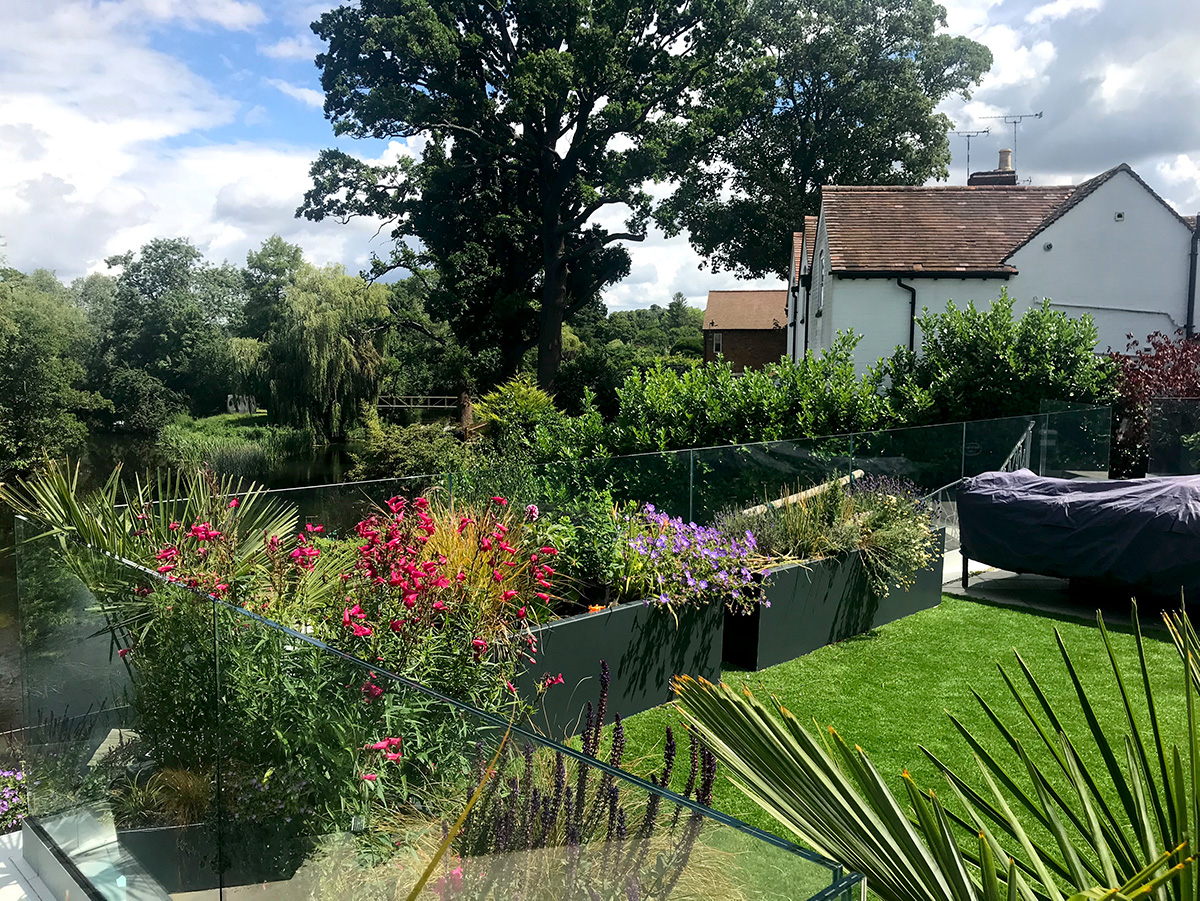 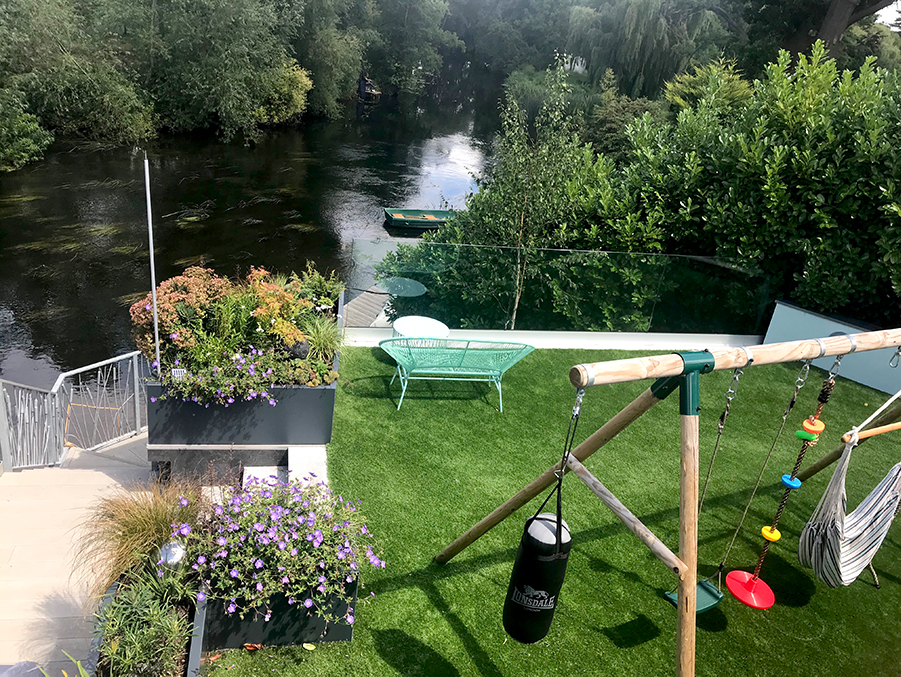 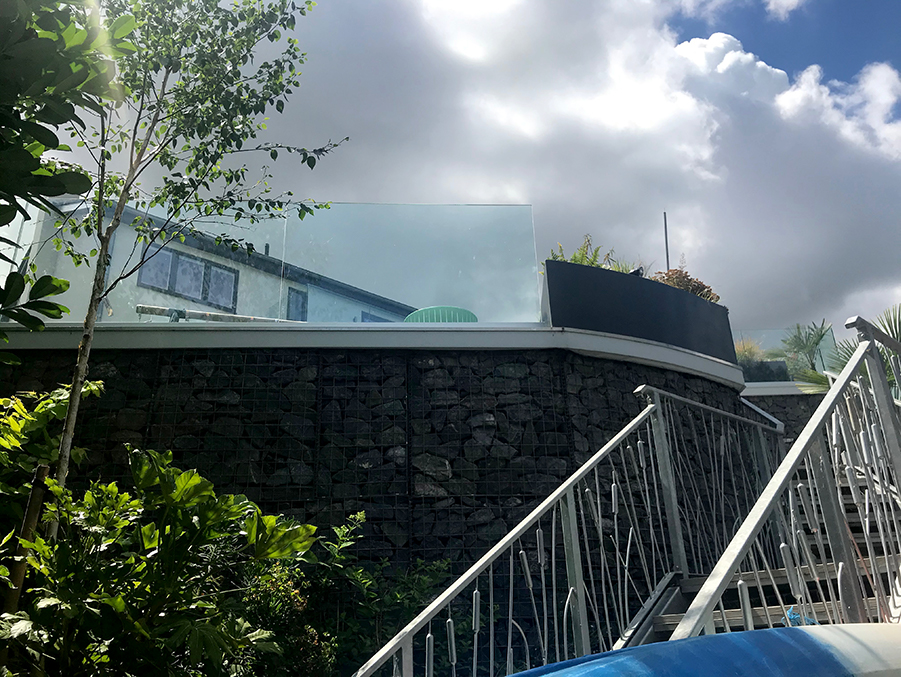 Working with the client, the layout was changed slightly to allow for more artificial turf and play space at the upper level. Planting areas were few and far between, as there was not a vast amount of soil accessible in the centre of the garden. To bring in more planting, we suggested adding bespoke fibreglass planters containing textural plants, to help to ‘green up’ the space.

The plans were approved by the local planning department with minimal alterations, and work began using the builders who were undertaking the works to the house.

The build of this garden would have made a fascinating episode of Grand Designs, as construction did not always go smoothly. But, two years later, we returned to plant the garden, which is now completed.

This garden has indeed been a labour of love – literally blood, sweat and tears. We have turned a challenging site into a modern, stylish riverside garden that can be used easily by all the family. We’re delighted that it works on all levels. 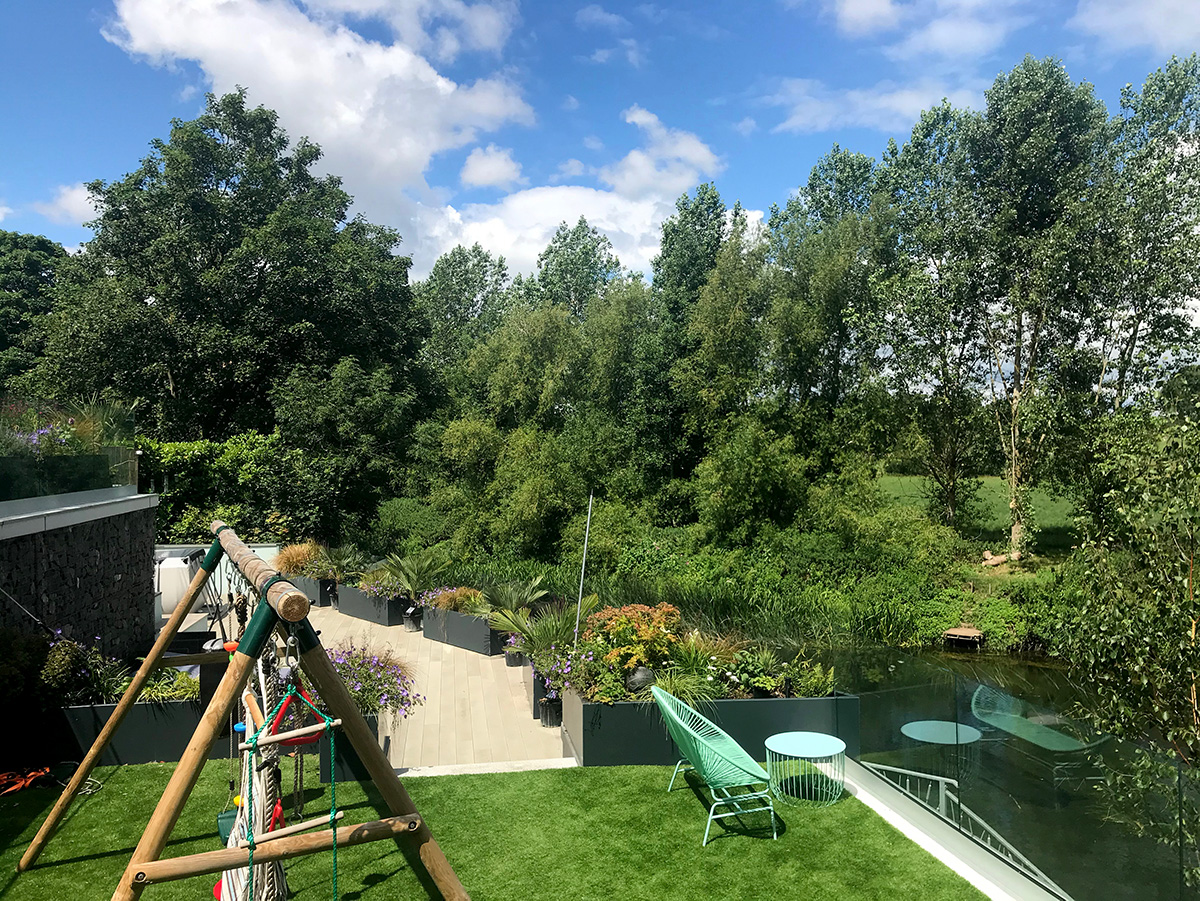 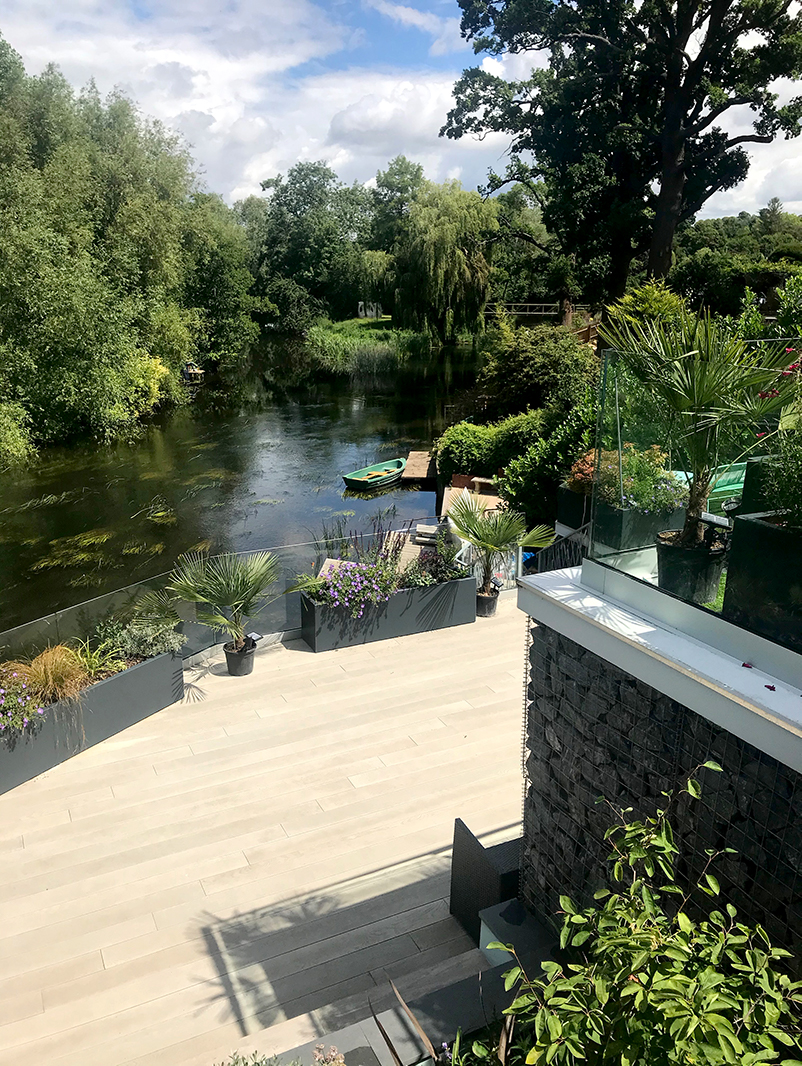 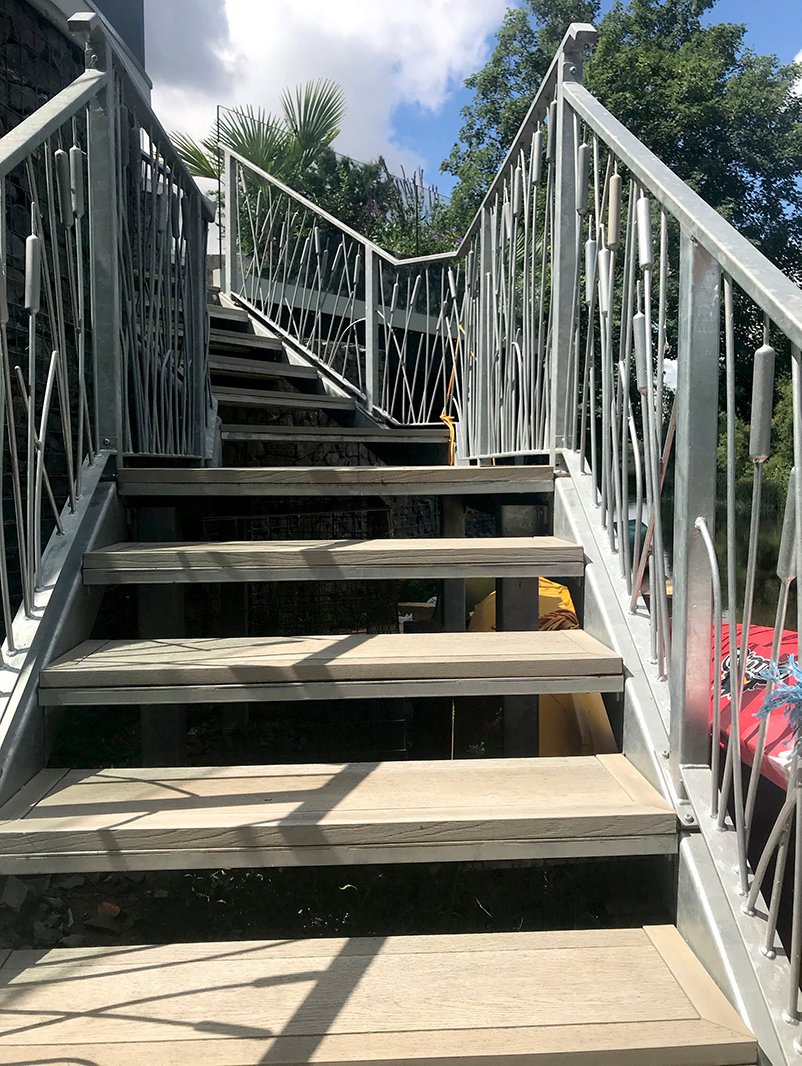 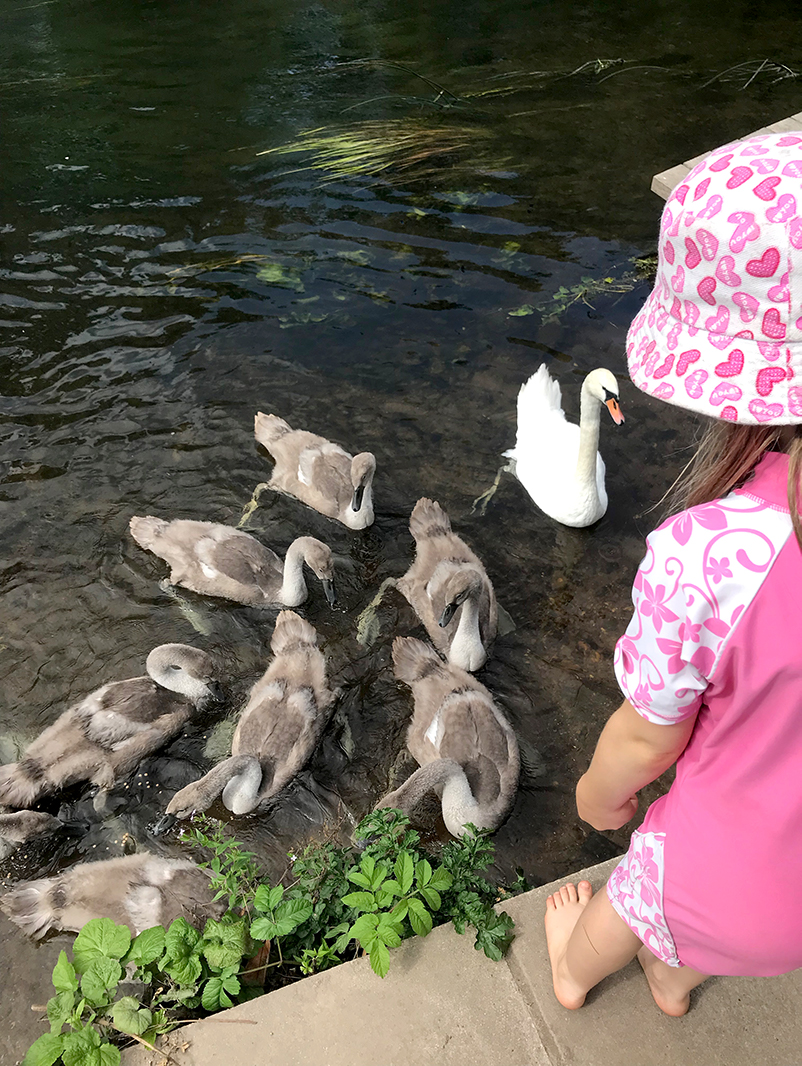