Taking the Inside Outside

In 1995, when architect Shigeru Ban unveiled his latest project in Tokyo, he had created something quite radical. On two sides of a three storey house he got rid of the all the walls and windows, and replaced them with a giant curtain.

The effect of the Curtain Wall House was to blur the boundary between the inside space and the outside.

In the world of garden design, this concept of taking the inside outside is not new. In 1969, the British garden designer John Brookes wrote his highly influential book ‘Room Outside’. Brookes argued that gardens were not about horticulture but about living. Gardens could become usable extensions of the home living space.

This is exactly what our clients wanted from their new build garden when we first visited them in January 2015. The site (below) was a total blank canvas – fences on three sides, lawn and a small patch of paving outside the patio doors. 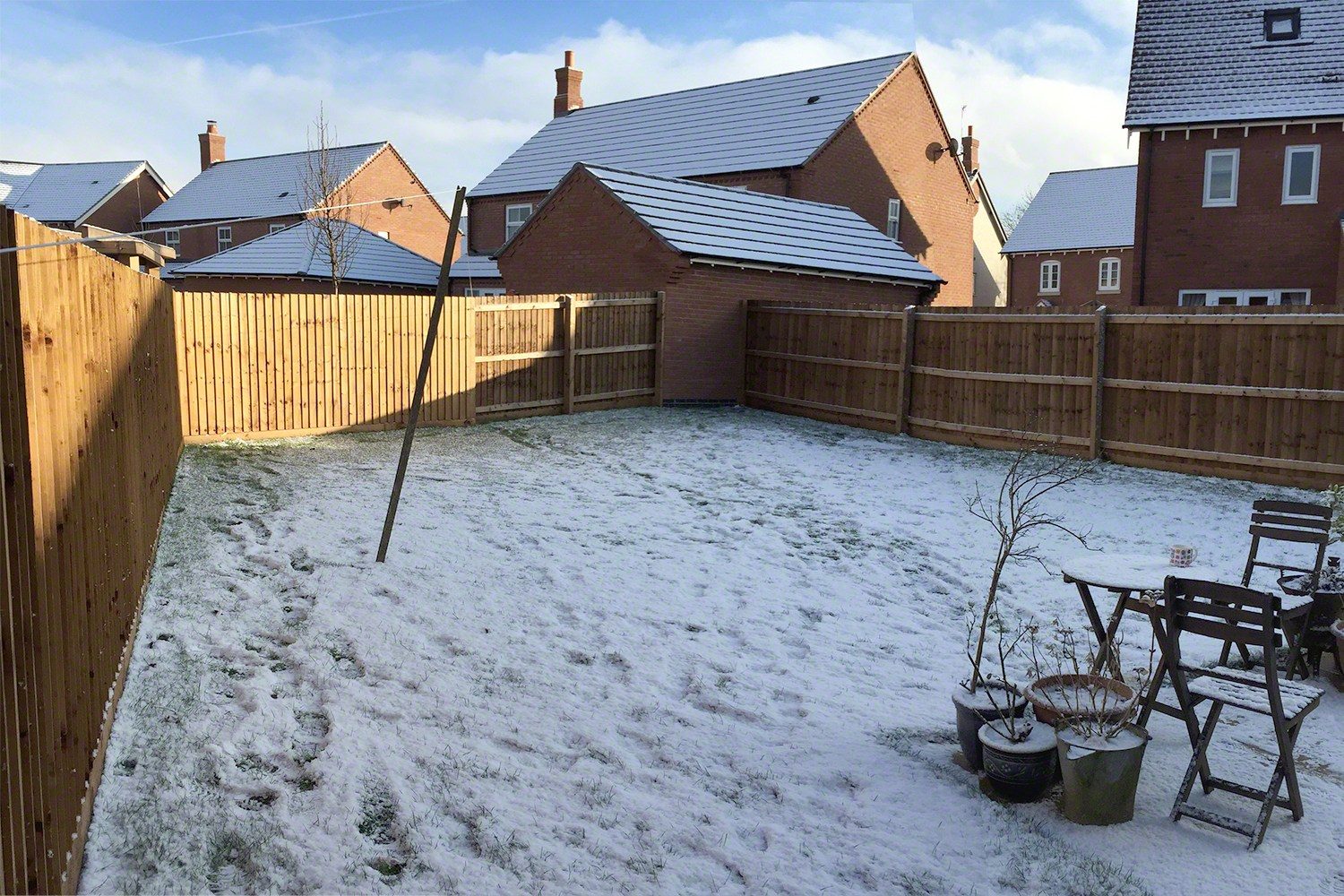 Our clients had a shopping list of requirements, but the three main ones were: 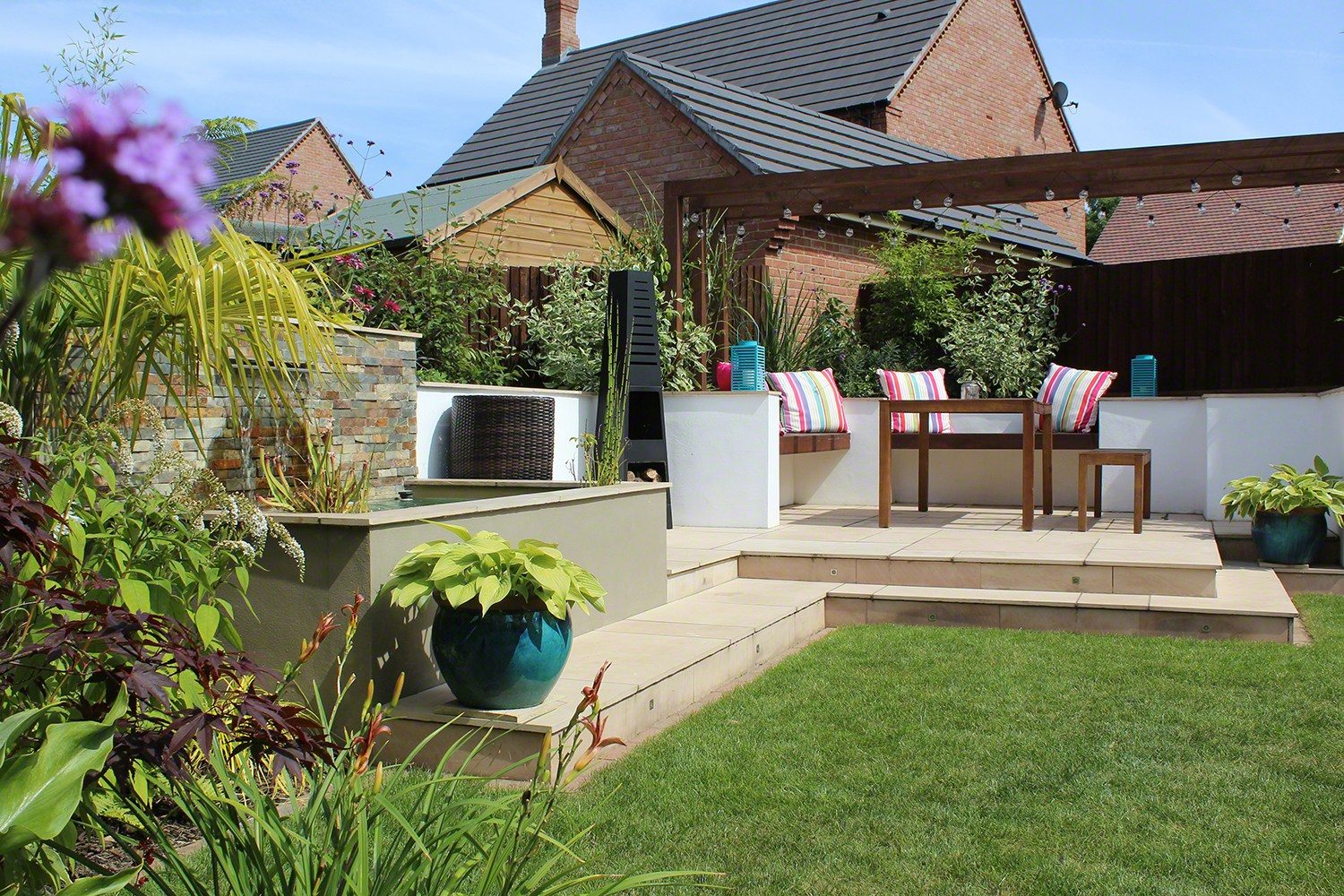 A usable seating and entertaining area

In a north-facing garden, which this is, the sun shines on the far end during the afternoon and evening. To make the most of the evening sun, we situated a raised sandstone seating area in the far right hand corner.

We included floating hardwood seats, set in white rendered blockwork walls. Above this sit three timber arches – these add height and provide a framework for the client to hang overhead outdoor lights.

Next to the seating area is a small split-slate water feature. 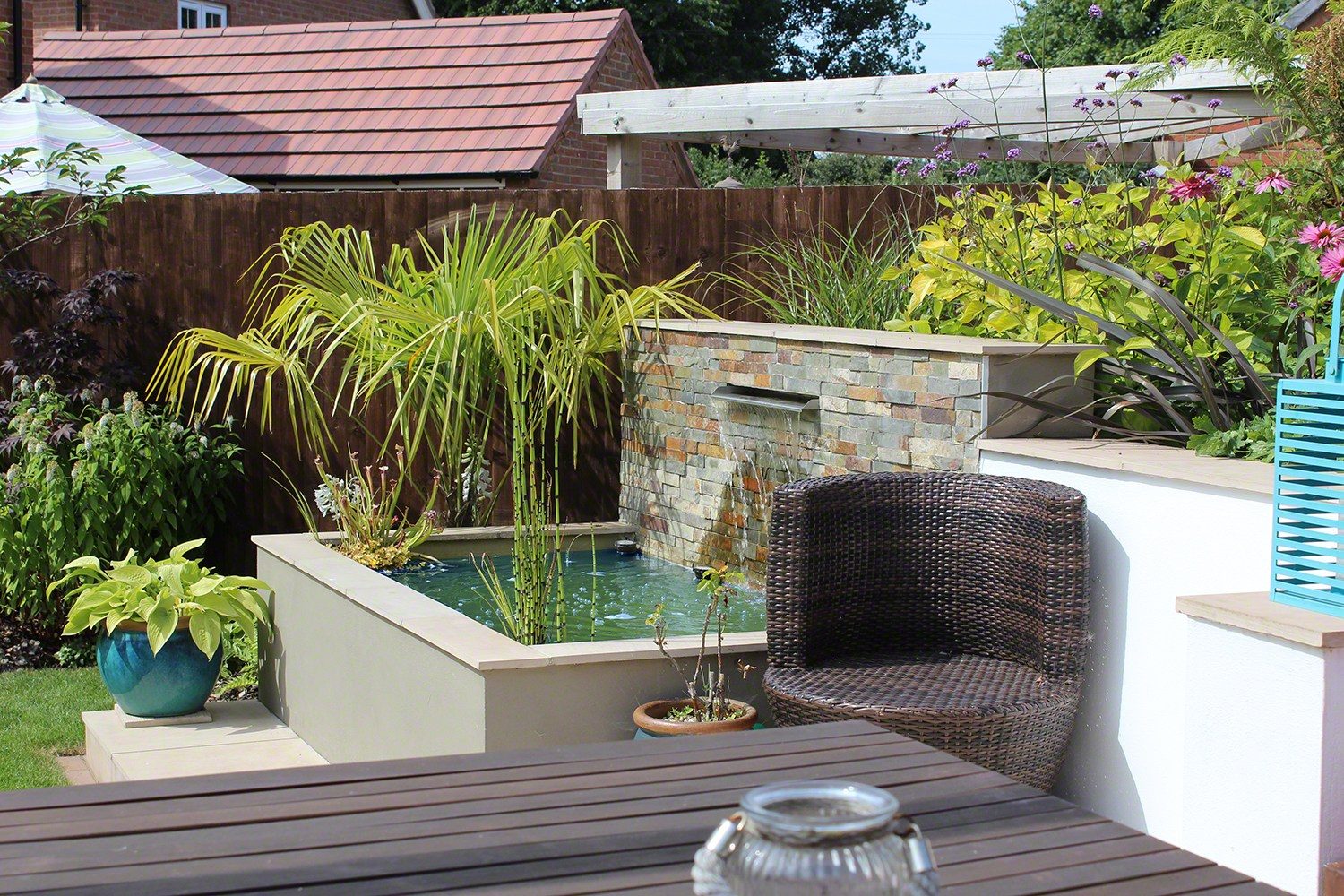 When thinking about extending the interior styling to the garden, the design cues were already in place. The clients had a crisp, clean contemporary kitchen extension looking directly out into the garden space. Our choice of complimentary material and style was a relatively straight forward one.

We specified smooth sandstone paving with small LED step lights. The water feature is clad in split-slate tiles with a stainless steel water blade, and the pool features subtle uplighters. 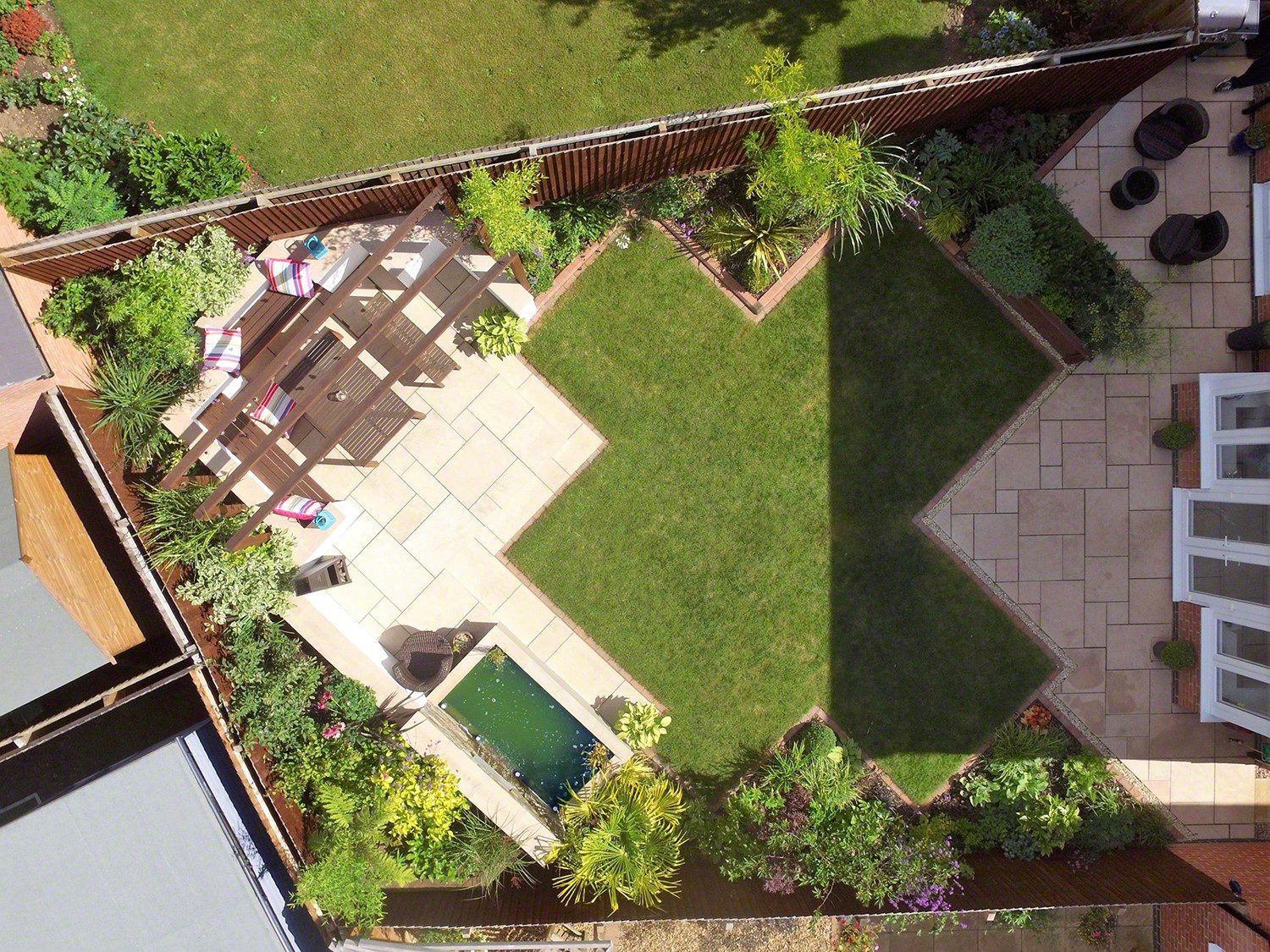 With six-foot fencing on three sides, the garden felt a bit claustrophobic. Down one side the fence was smooth, but on the other side the fence posts and arris rails were exposed. To remedy this we decided to close-board the exposed side (as you can see above), and then treat the whole fence in dark brown wood preservative. This has the effect of making the fences appear to recede, while also acting as a backdrop for the foliage and flowers.

It can be. Even though this garden is quite small there are expensive materials used, and the process of creating white rendered walls required a skilled professional to get right.

But in this case we worked within a tight budget and the client built the garden and purchased the materials themselves. 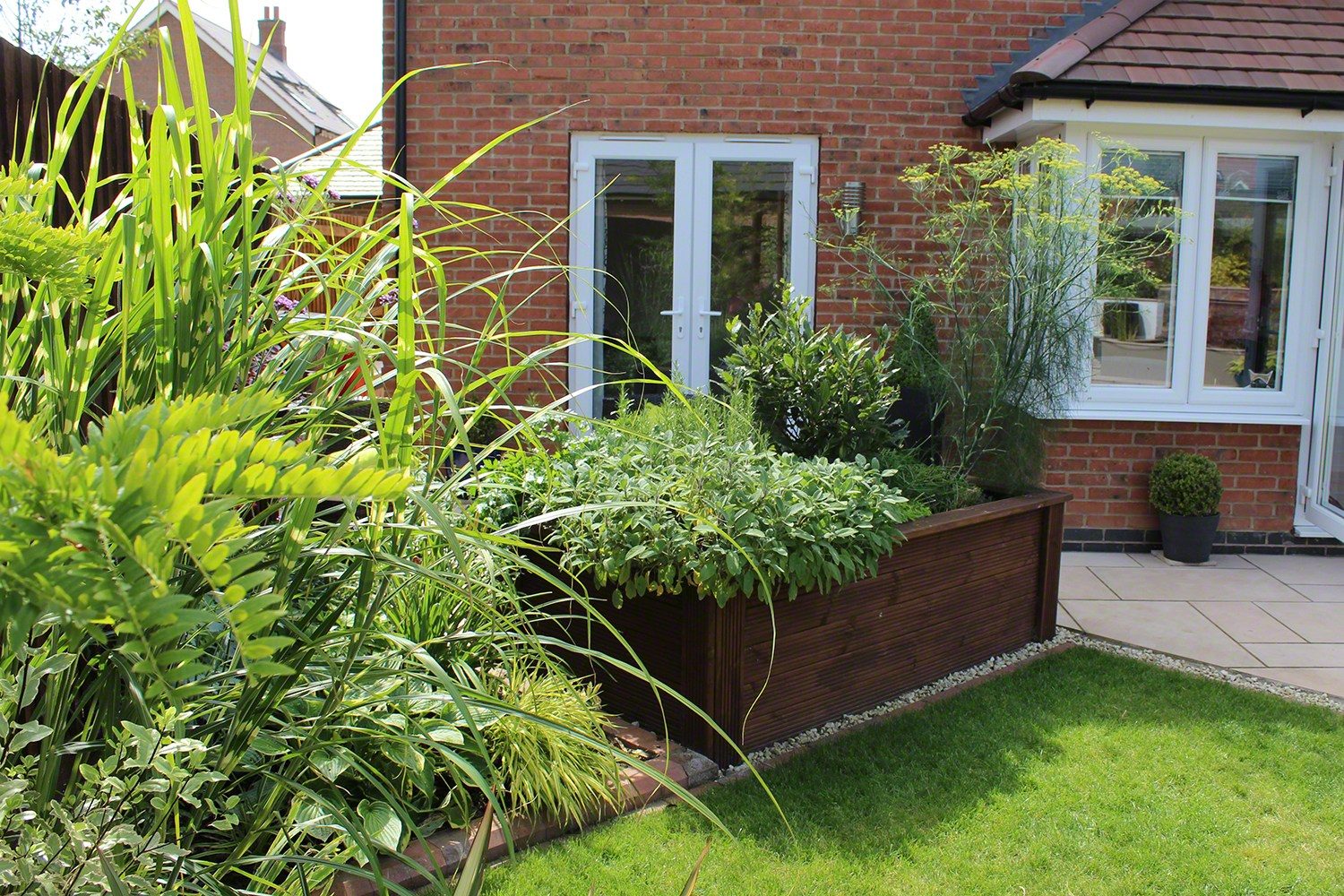 We hope you’ll agree the end results are impressive. The unused garden space has been transformed into a desirable area for entertaining and relaxing. The contemporary look is complimented by a modern planting scheme which is fairly low maintenance.

The boundary between the outside and the inside has become blurred and the client has gained more space to enjoy – something Shigeru Ban also achieved in Tokyo with his Curtain Wall House.